An abdominal aortic aneurysm is a swelling (aneurysm) of the aorta – the main blood vessel that leads away from the heart, down through the abdomen to the rest of the body. It is a common and potentially life threatening condition.

It is thought that the abdominal aorta might begin to bulge when its wall weakens. It is currently unknown what causes the weakness but smoking and high blood pressure are thought to increase the risk of an aneurysm.

The aorta is normally 2 cm across and international guidelines suggest considering surgery once an aneurysm grows to 5.5 cm in men or 5 cm in women. However, this is a debated threshold and there is marked clinical deviation from this standard as demonstrated in 2012 where research showed that the average size was 5.83 cm in the US and 6.37 cm in England at the point of surgery. England demonstrated a significantly higher rate of hospitalisation due to aneurysm rupture and aneurysm-related death and, the death rate from abdominal aortic aneurysms is more than three times higher in England than in the US.

Dr Karthikesalingam of St George's, University of London, says there needs to be more research to determine if doctors should perform preventative operations on smaller aneurysms.

The UK began introducing a screening programme for aneurysms in 2009. Abdominal aortic aneurysms are most common in men aged 65 and over which is why all men are invited for a screening test when they turn 65. A burst aorta accounts for around one in 50 deaths in this group of people and roughly 6,000 people are killed every year. The test involves a simple ultrasound scan, which takes around 10-15 minutes.

In most cases, an abdominal aortic aneurysm causes no noticeable symptoms. However, if it becomes large, some people may develop a sudden and severe pain or a pulsating feeling in their abdomen or persistent back pain. A large aneurysm can be very serious as if it bursts it can cause internal bleeding and even death.

If you suspect that you or someone else has had a ruptured aneurysm, call 999 immediately and ask for an ambulance.

The death rate from abdominal aortic aneurysms is more than three times higher in England than in the US, analysis of official data shows. The weakening and swelling of the main blood vessel from the heart is normally fatal if it bursts. A study published in the New England Journal of Medicine, raised "concern" that English surgeons may be performing preventative operations less often. 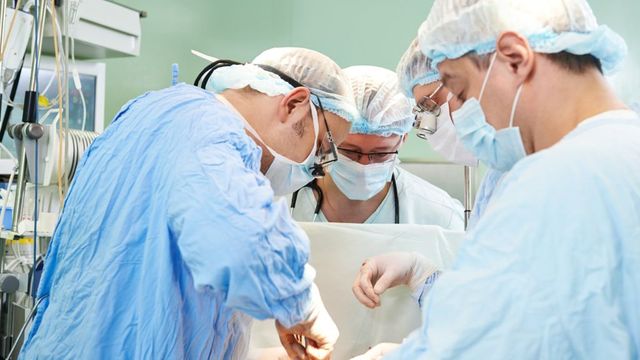 A global vision to defeat meningitis by 2030
Lucy Habgood